Sleep has never come easily to me. Years after the Appalachian Trail I’d still occasionally turn over in the middle of the night and reach bleary-eyed for the headphones on my nightstand to plug them in and listen to one of the few sounds that would bring an end to my rising anxiety if not to my sleeplessness: rain on a tent. By the time the day’s saga on Couchsachraga had come to a merciful end and I’d climbed into my hammock for some rest, that old familiar patter began to resound from the tarp above me and with it came its usual paradox—the soothing lullaby of the opening skies would herald a good night’s sleep but also the dreary, wet day to come, replete with its own unique set of challenges.

Time has a way of expanding when the weather turns to the south. Every humanly instinct is to blaze through even the smallest of tasks, hoping to limit exposure to the elements as much as possible but the reality is quite the opposite. Fingers chill, dexterity wanes, and once sure steps become shorter and more calculated as dry rocks and roots become slick with water and mud. The most basic concepts of both staying warm and keeping one’s wits can so suddenly feel like countervailing principles.

Such was the swirl of thoughts in my mind about the day ahead when I reached out of my hammock to light the stove for my morning coffee and savored those vanishing grains of sand in the hourglass before it was time to shoulder my pack and set off into the elements. In reality, this was a “rest” day sandwiched in between yesterday’s odyssey and tomorrow’s triumph on the 46th and final summit, nothing more than some easy miles out to the car followed by a drive to the eastern side of the Adirondack Park and a hike back into the interior, but the weather would make even that simple plan a trying one.

After the four of us had briefly huddled about the morning’s plan, Emily and Jane set off down the trail with Mom and I following behind down the poorly maintained stretch of trail whose now thick mud threatened to suck the shoe directly from a carelessly placed foot. The car that waited at the end of the rainbow finally came into view after the trail had emerged onto a far more pleasant gravelly forest road, and we whisked ourselves away to the town of North Creek as a bit of a detour before heading over towards the Dix Mountain trailhead. Like a halftime of sorts, we regrouped by heading directly to the local laundromat to dry out all of our saturated clothes and get a bite to eat before loading our renewed selves back into the car.

When we pulled into the Round Pound trailhead leading to Dix Mountain just south of Keene Valley, the rain had dissipated to a temporary drizzle and it served only to lift our spirits further for the hike into the Bouqet River Lean-to at the foot of tomorrow’s climb. At the risk of shattering the suspense, the reprieve didn’t last. What was briefly a neutral sky, spent of its wrath from earlier in the day, slowly but consistently morphed back into a steady rain, ensuring that what should have been easy miles would yet again be a slog into the evening hours. My mind had ample time to wander back to all of the countless days on trail that resembled this one, contemplating how that Rolodex of memories had managed to slowly harden me over the past three decades and make inevitable days like this one that much more tolerable. And when it comes to memory and this place, my Dad is always in the very next frame. While we made our way ever closer to the night’s destination at the shelter, the symmetry of these hikes with my Mom finally came into focus. A mere 24 hours from completing the arc of climbing all 46 of the Adirondacks’ highest peaks, I realized how incredibly rare and lucky a person it is that can claim such a feat with a Father at one end of that arc and a Mother at the other. It was quite another feeling entirely to realize that I was that person.

The final trial of the day arrived when the mental buoyancy of anticipating an empty dry shelter to end the day in vanished at the sight of a group of college kids having stuffed themselves into every square inch of the lean-to. All that was left was to find a semi-dry spot to pitch our tents next to the lakes that had formed in the designated camp sites near the shelter, and set about making dinner and warming ourselves up.

Morning came and with it a brighter horizon already hard at work sweeping away the remains of yesterday’s gloom and with the realization that the weather had at last turned back in our favor came another—that the 46th summit of this great adventure was waiting a few short miles and a few thousand feet above our heads. Out onto yet another trademark slide of Adirondack bedrock and up into the clouds we went, hiking over a trail on which Emily and Jane commented, “it looks like an incident happened here.” True to Adirondack form, it indeed looked like some great landslide had occurred and that a makeshift footpath had simply been forged upon it.

Little by little the forests gave way to the twisted krummholz fir above tree line as pockets of increasing size began to open and close between the thinning clouds. When the footpath became all granite, it became a pleasant guessing game of which fast approaching moment would be the moment that the summit finally came into view, until there it was. It’s hard to know what exactly to feel at the moment of completing something, let alone when that something has been a work in progress for more than the last quarter century, but the only obvious thing was to celebrate. 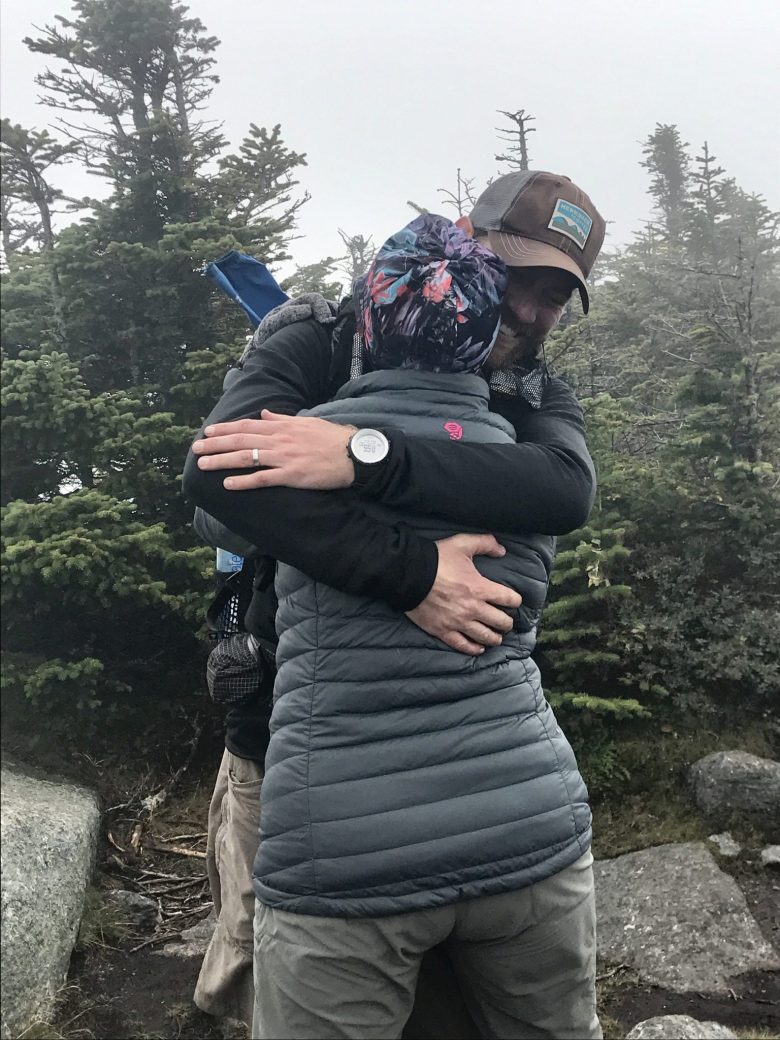 The 46th and Final Summit 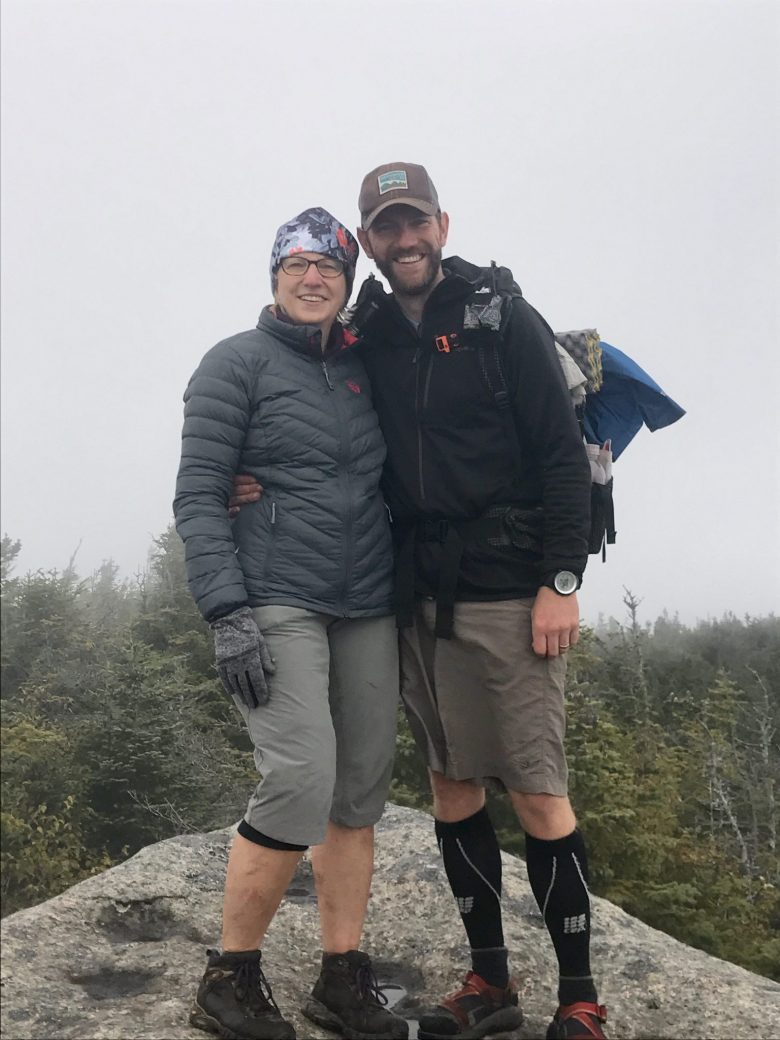 What had seemed like such a never-ending lifelong adventure had so suddenly come to a bittersweet end high on a cold, windswept summit in the clouds. A more fitting conclusion I could not have imagined.

When we tore ourselves away from the top and set to the task of clambering down over the same trail from which we’d come, views of the Great Range began to appear as a parting gift of sorts to commemorate the occasion. 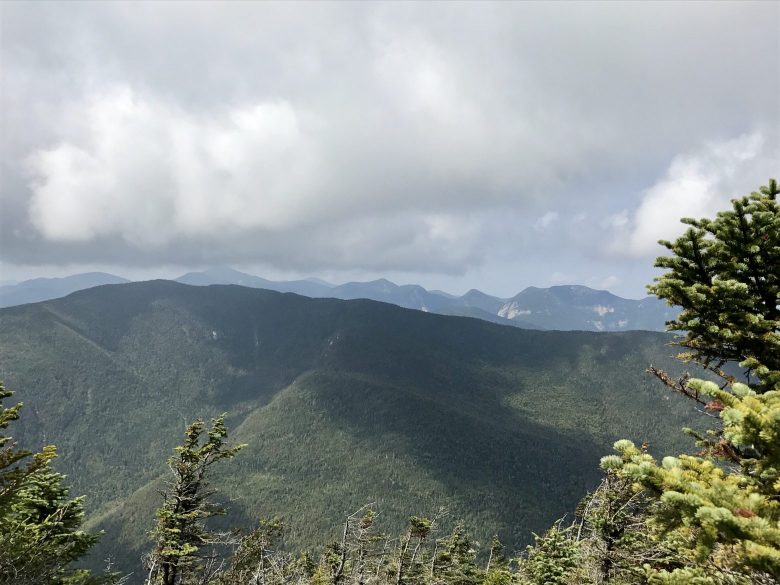 The Great Range from Dix Mt.

Of course, the promise of a champagne celebration back at the shelter was a nice carrot drawing us down the trail as well. 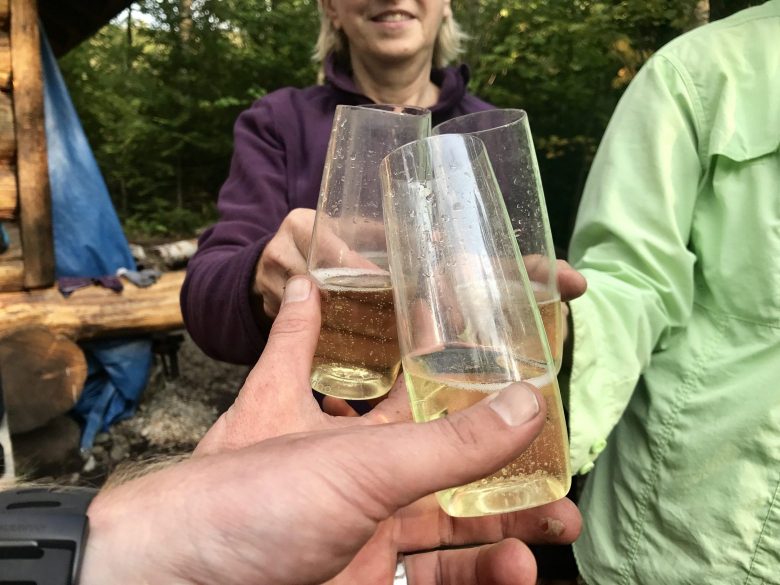 And when that bubbly finally began to flow, it was this Adirondack mountain love affair, wending its way through the connective tissue of my life’s journeys, that I was toasting to. To my Mom. To my Dad.

These days, the completion of the 46Rs may be in my rear view mirror, but my love for them and the roots they’ve always given me remain unweathered. As with all great loves, I’ve come to realize that they’ve been etched in my heart and mind all along, so it only seemed fitting to etch them into my skin as well. In one sense, it’s always been there... 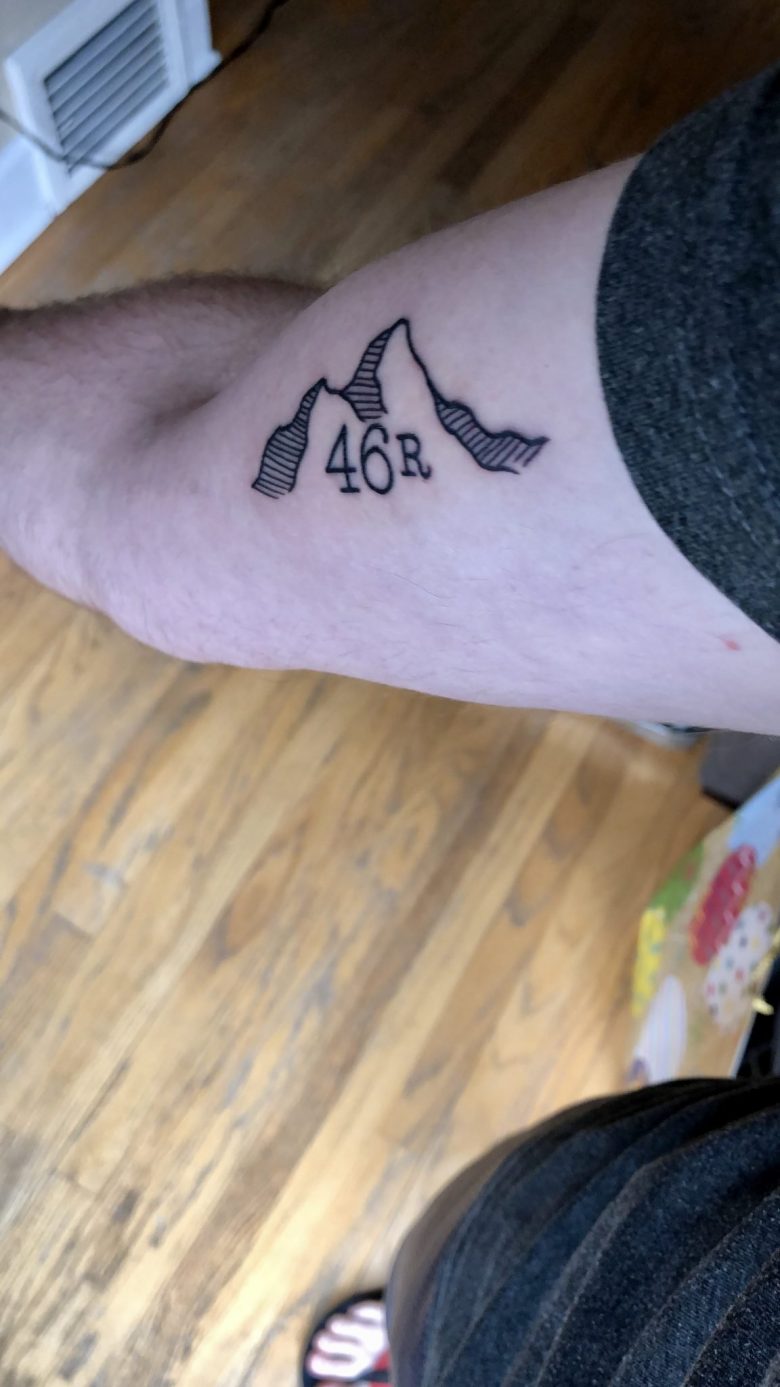 Adirondacks in the flesh