Since crossing I-5 outside of Ashland, I've felt closer to civilization in Oregon than any other stretch of the trail so far. The best evidence is the number of consecutive road crossings, many separated by less than half a mile, that we seem to encounter every day here. Though all are rural and in various forms of disrepair or overgrowth, they're another reminder of the ever-changing character of the trail.

Whenever roads are close by, I've learned to expect the unexpected. In this case, a half mile before a gravel road, we looked up to find a 15-foot banner hanging from a tree beside the trail. Complete with a small wooden information kiosk, it was a campaign appealing to PCT hikers to oppose the liquid natural gas pipeline that has been proposed to run through this forest and cross the trail at this very point. If approved and constructed, the virgin forest of never-before-logged pine and fir in which we stood would suffer a new 150-yard clearcut all the way to the ocean. All under the short-sighted banner of facilitating the export of a fossil fuel. 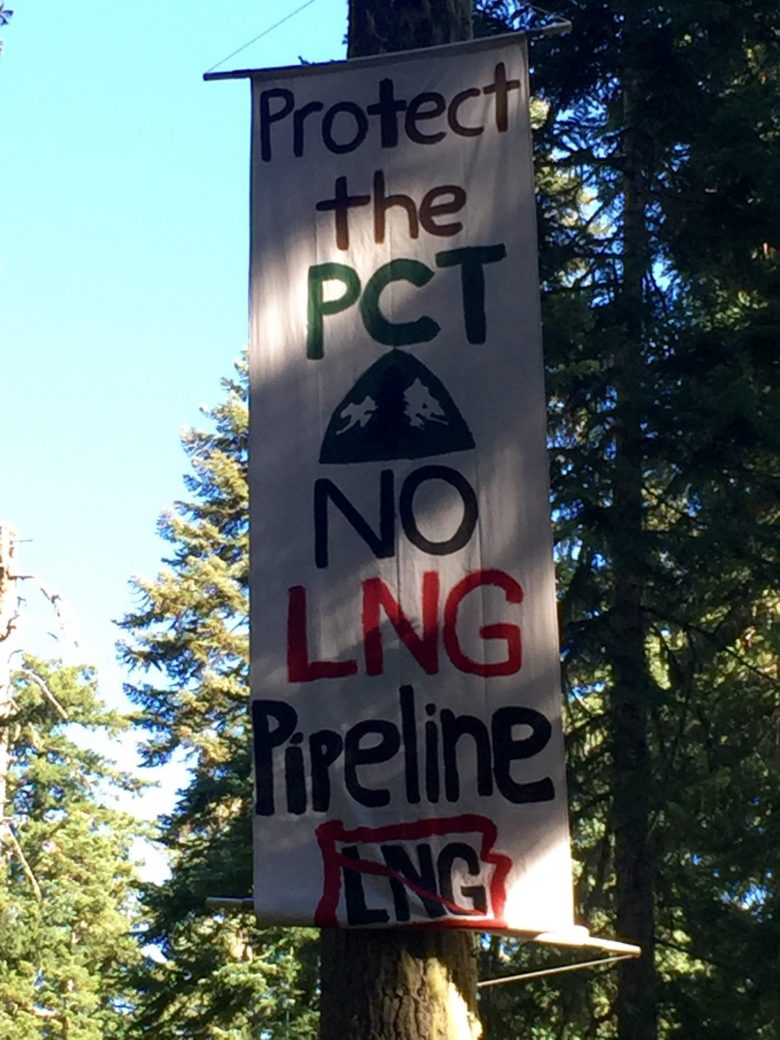 As if to bring home the point of what such a proposal would destroy, it took only one look at the surrounding forest to recognize that it was quite different from so many of the others we'd traversed. Allowed to evolve naturally without the influence of timber or other enterprises, it was a glimpse into the past of our wilderness areas, the way forests were in their natural state. Stretching in all directions, the understory was incredibly low and you could see for hundreds of yards between the trees. Lucky for us, what little understory there was was almost exclusively comprised of blueberries. Lots and lots of blueberries. It was a sea of 2-foot tall plants stretching as far into the forest as you could see on both sides of the trail.

Passing through thickets of blueberries

After staining our hands with the deliciously sweet and tart berries, and just before reaching yet another gravel road, we came upon a humble little floral arrangement announcing that trail magic was waiting up the road. I could never have imagined what we found when we got there.... 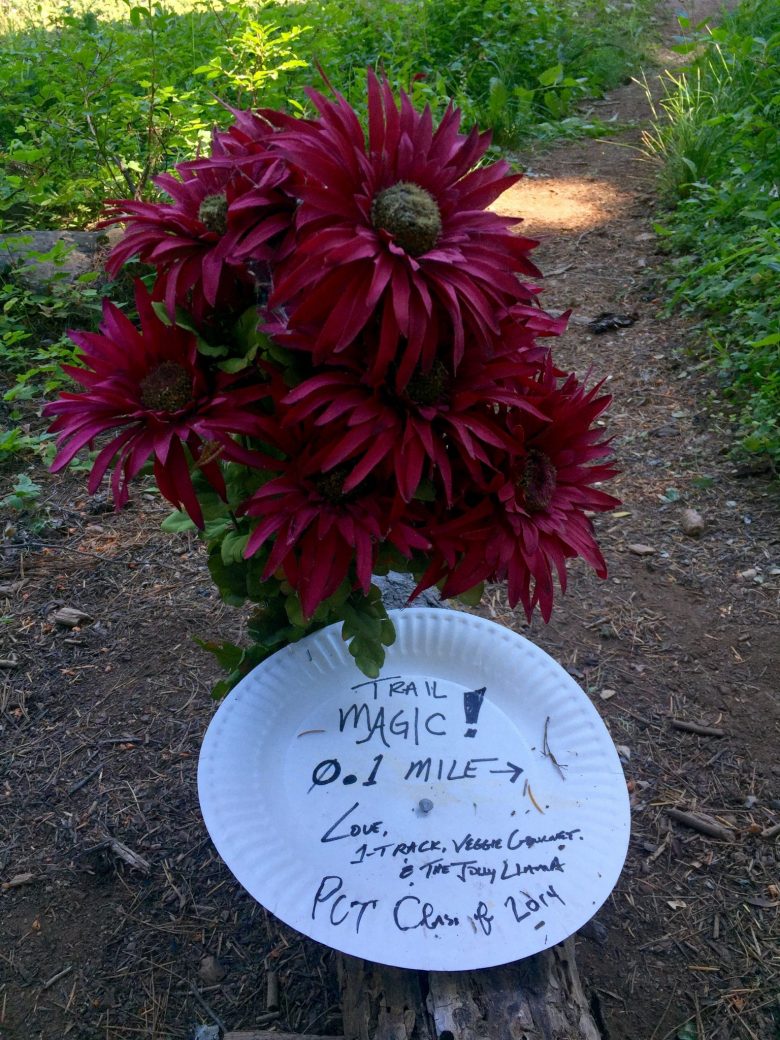 Veggie Gourmet, 1-Track, and The Jolly Llama from the PCT class of 2014 were putting on something quite unique. Greeted happily and then asked to put on a costume hat of our choosing--to add to the festive atmosphere, we were told--we were then asked what kind of drink we'd like and what kind of cereal we'd like for an appetizer: Lucky Charms or Cinnamon Toast Crunch. As we munched away on that, they presented us with a cardboard menu describing the various made-to-order options--this was truly a whole new level of trail magic. Suffice it to say, our late morning experience at "Le Bistro" was definitely something to be remembered.

Ordering from the menu

With miles still to make to reach our next resupply destination at Fish Lake Resort, we tore ourselves away from "Le Bistro" and soon found that the blueberry forest had given way to fields of lava rocks with the trail a ribbon of red rock snaking its way through them. 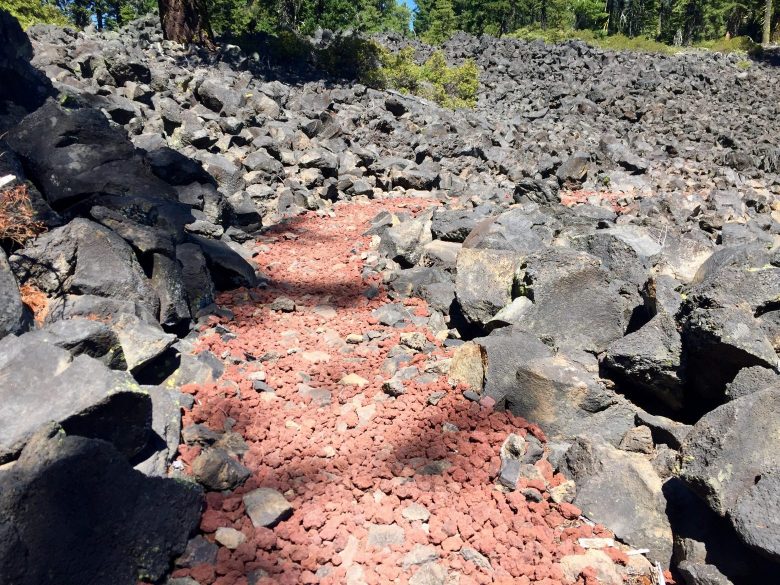 The farther we went, the larger Mt. McLoughlin became, looming impressively over the forests that crept up its lower slopes. 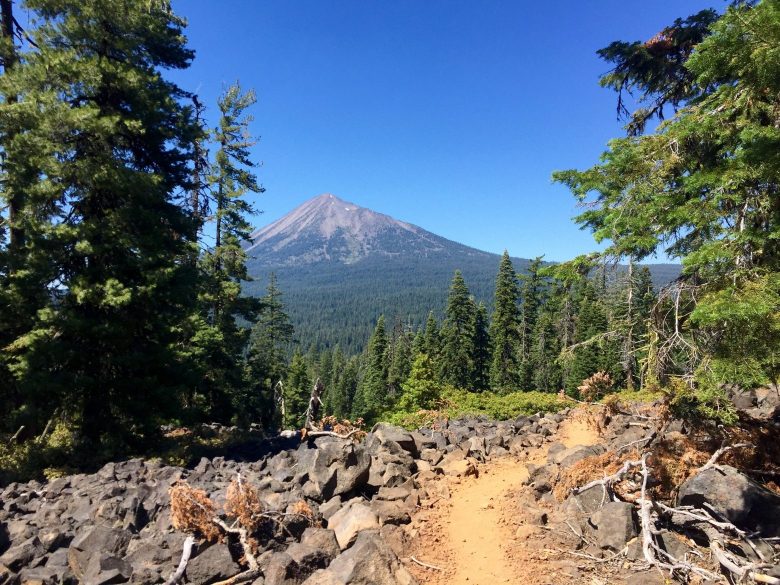 By 4:00pm, we'd reached the side trail leading two miles down from the PCT to the resort on Fish Lake, which is little more than a campground and a small store/cafe. Away from the hubbub of the campground proper, we have a secluded thru-hiker campsite near the shore of the lake all to ourselves on another perfectly warm evening. Tomorrow, it's one of only three remaining days off between here and Canada before a steady diet of higher mileage days takes hold. 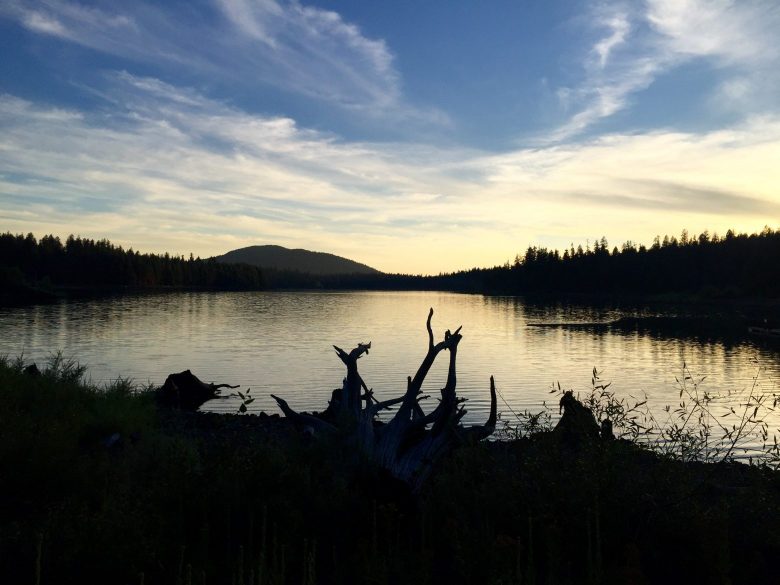