When I think back on the 12 or 13 hours between the start and end of hiking each day, it's remarkable how many different phases it can take on. Like a play in multiple acts, there are often high points and low points, internal conflicts and resolutions. Today began with tired legs and a tired mind as I hauled myself up and over the first long climb of the day and by the time the second rolled around, it had only gotten worse. Slowly but surely, though, the tide began to turn and I was feeling nearly my usual self when we crested the final climb and began the descent to camp. My own little internal drama had come to a satisfying conclusion.

The first interesting sight of the day was, hands down, the three llamas that were grazing in the meadow near where we took a break. Belonging to a pair of women who were out on a multi-day trip, the llamas were perfectly content to lounge in the grass while occasionally munching and turning their heads both to investigate us and seemingly also to take in the scenery. 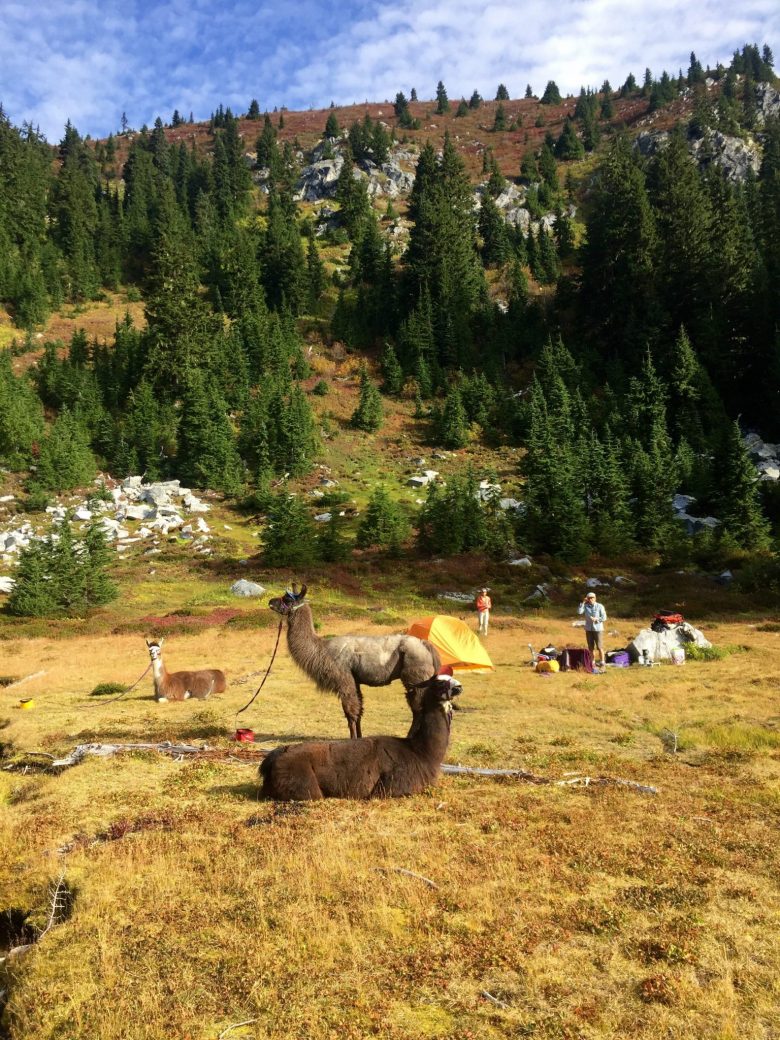 Llamas on the PCT?

Not five minutes after leaving the llamas, a trio of search and rescue workers stopped us on the trail and showed us a picture of a woman who'd gone missing after what ought to have been a fairly straightforward day hike in the area less than 24 hours ago. Without any overnight gear, it would have been a rough night and we left the exchange hoping that we'd either find some sign of her or that there was some other as yet unknown explanation for her disappearance. It reminded me of a similar encounter with search and rescue workers way back on Mt. San Jacinto less than 200 miles from the Mexico border. Hopeful but uneasy about the situation is how I'd describe my mindset on both occasions.

The clear blue sky of the morning had been quickly shoved aside by an advancing layer of high clouds. The weather forecast we saw yesterday was a seismic shift from the one we'd seen only days earlier in Snoqualmie Pass. Instead of consistently sunny days, rain or, at best, general uncertainty was now the latest prediction. The overcast that rolled in didn't seem threatening, at least not yet, and it was still at a high enough altitude that it didn't interfere with the views we had to the mountains that surrounded us. Glacier Peak loomed large in front of us, and Mt. Rainier and the southern and central Cascades looked like the teeth of a saw behind us.

Jagged crown of the Cascades

Glacier Peak itself was a guiding light of sorts for most of the afternoon. Beginning as a distant, lone peak in the late morning, it slowly grew larger and larger as we inched our way nearer to it.

At every turn, the vibrant crimson and gold colors of the foliage became more and more striking. Every side of surrounding mountains that was not covered by trees was painted in similar tones. 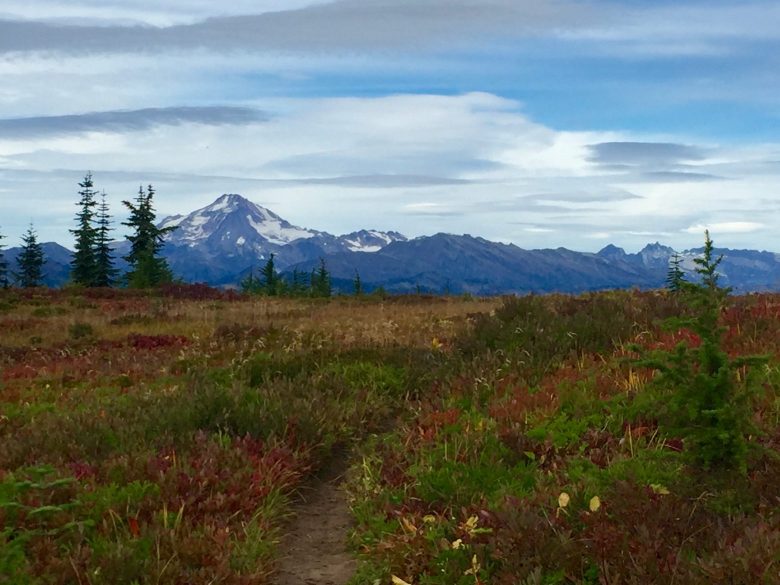 Not surprisingly, the Pacific Northwest is also mushroom land, and after passing by countless examples of all shapes, sizes and colors these past few weeks I couldn't pass up a photo of this one when I did a double-take upon seeing its size. 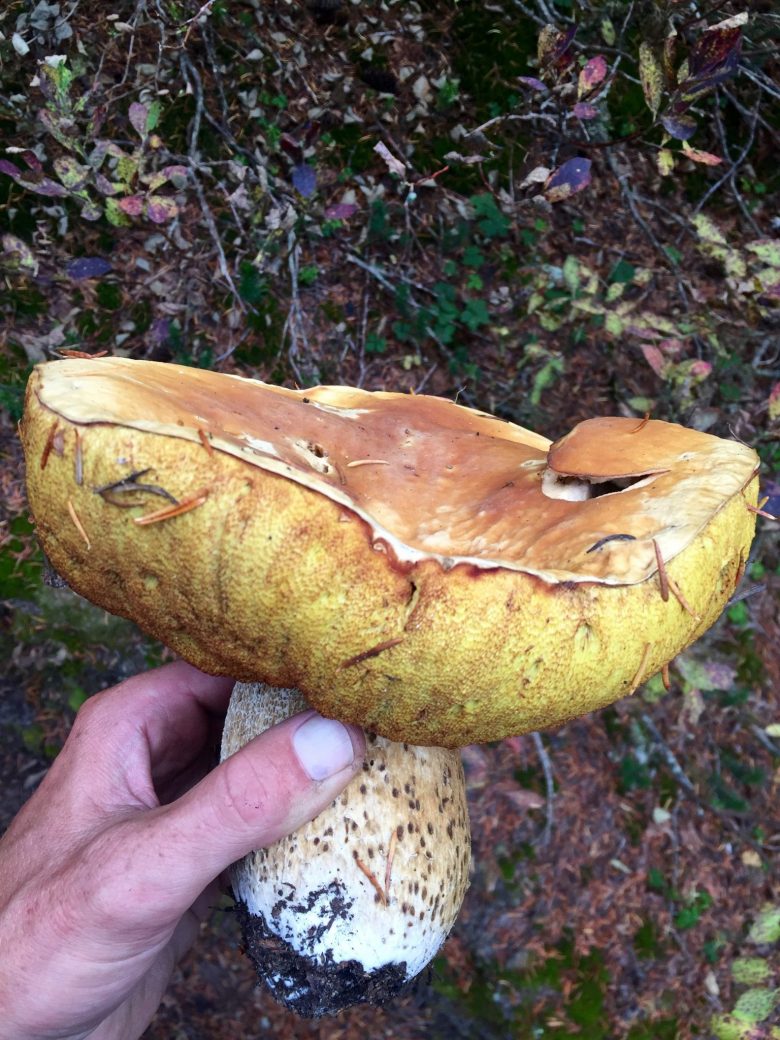 If only I could identify and supplement my diet with some of them to keep all the huckleberries in my stomach company... 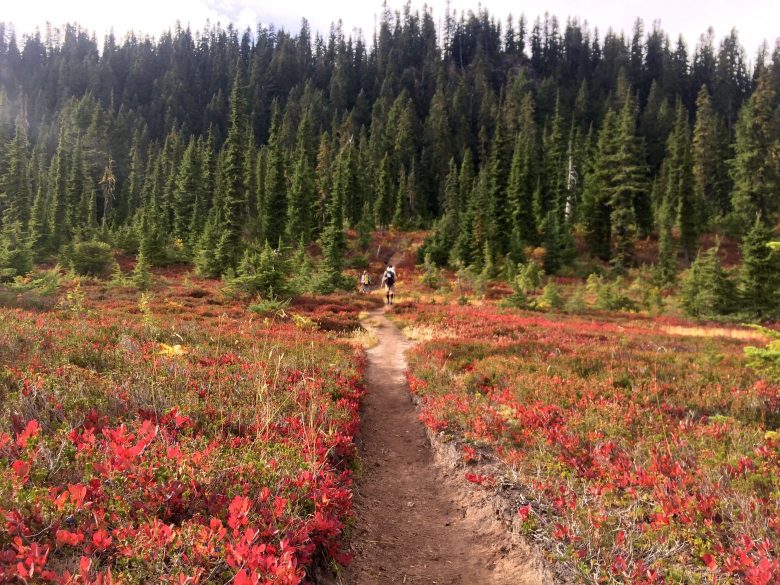