A relationship with nature is, surprisingly, not altogether different from any other relationship with a loved one or a friend. Motivated by the conditions on a day like yesterday, it's the easiest thing in the world to feel frustrated, angry. But weather is simply an inextricable part of the wilderness, and how can you hate a thing you love for being itself? I pondered this today as the rains broke and only the cold lingered as a reminder of the day before. In a manner of mentally wiping the slate clean, my inclination was to express some sort of forgiveness to the wilderness all around me for the adversity it bestowed upon us yesterday, but realized again the absurdity of forgiving something for being what it is. Nature isn't just the sunny days, and you have to love it for what it is, even if love feels a bit more like perseverance once in awhile.

Having banked a few extra miles each of the last three days out of Cascade Locks, we'd managed to shorten this day to a downright civilized 14 miles to a forest service road where Q-ball would be waiting to meet us and take us into the town of Trout Lake for resupply. It's hard to believe, but only four resupply stops remain between here and Canada. The strange ache in the joints of my right toes managed to spread to my left foot overnight as well, making all of them difficult and painful to move in any direction. I've never felt anything quite like it, and it made even the short distance of today's hike more challenging than it would have been otherwise. Q-ball had run south on the trail as part of his final training for an upcoming 100-mile race next weekend and after meeting us, turned back around to walk the remaining miles with us to the car where he had a spread of snacks waiting.

Trout Lake was abuzz with the activity of the Labor Day weekend, and after picking up our resupply boxes at the general store we sat in the sun outside and aired out our wet gear while doing a load of laundry. On a crisp day in the 50s that seemed to herald autumn, we relished the rays of sunshine that came between patches of puffy clouds. The final stop was at the cafe for burgers and huckleberry pie, which seemed like too modest a meal for my stomach so I opted to throw in a huckleberry cinnamon roll strictly out of an abundance of caution. Afterwards, we loaded back into Q-ball's car for the ride back to the trail. Under mercifully clear skies, it promises to be a cold, albeit dry, night. 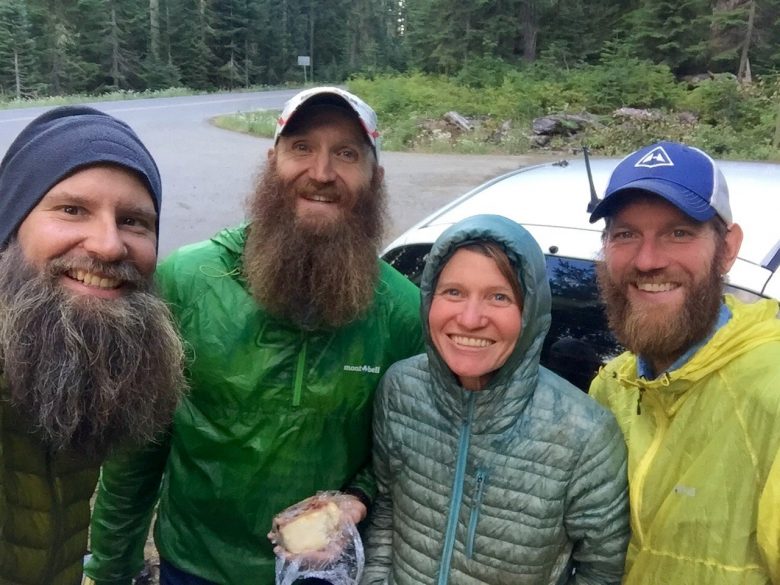 QBall getting us back on the trail