The alarm went off at 3:30am, and with it came a change in plans. After battling a stomach bug for the last three days, Gazelle decided it would be best to rest another day in town before taking her woozy stomach out into the heat. It was a disheartening start to the day, and combined with the grogginess of waking at such an hour, it was palpable that a shadow had been cast over the mood of the day. XC will stay to keep her company, but saying goodbye to both of them as Proton and I got into the car was an unexpected and difficult parting. Hopefully it's only a matter of days before we see them up the trail.

As the trail tiptoes through the foothills at the edge of the Mojave, the added heat demands a slight change in tactics for the week ahead--a twisting of the clock. To avoid hiking in the worst of the heat, we'll plan to start hiking between 3-4am each day until noon or 1:00, then siesta until 6 or 6:30pm before finally heading out for a few more miles in the cooler evening. Like bullfrogs jumping from lily pad to lily pad, so too do we jump from water to water, break to break, shade to shade.

Our ride having delivered us to the trail at 4:20am, Proton and I started the climb up from Tehachapi Pass under headlamp until the predawn glow was enough to light the way. For fans of the book Wild, I think this is the pass where Cheryl Strayed began her hike--we even found her name written on the inside of the trail register near the highway: "Cheryl Strayed '98." 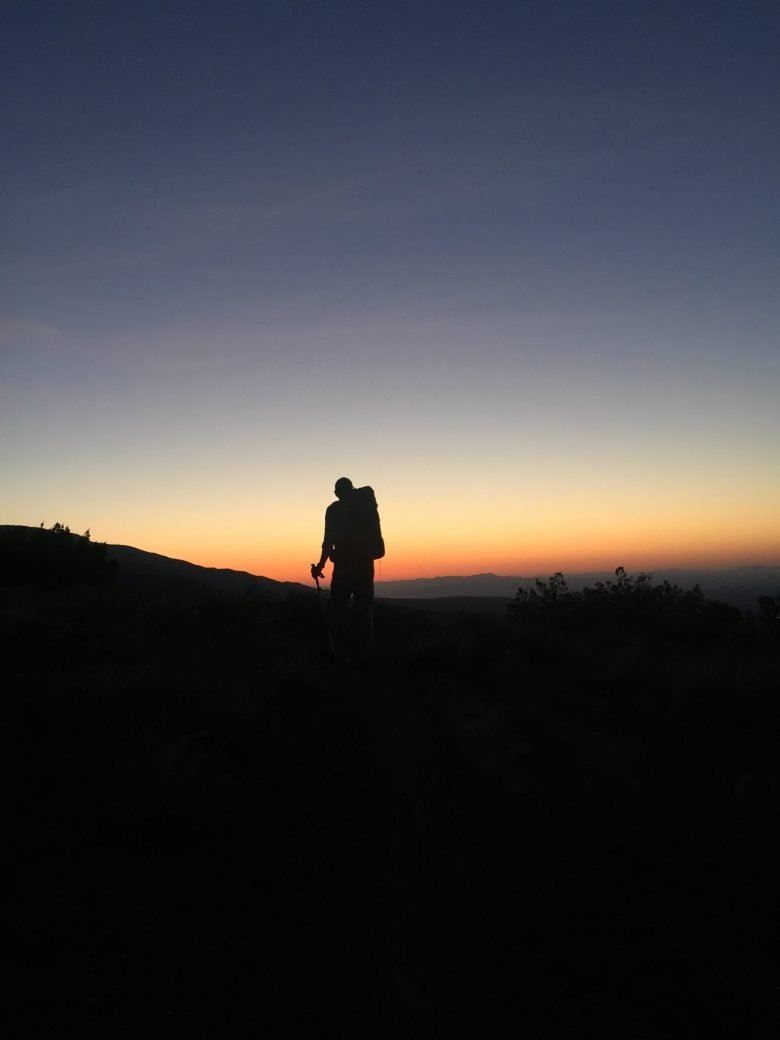 But despite her absence, today was really all about Gazelle. A vibrant and adventurous 24-year-old from Vancouver, BC, Gazelle arrived at the border of Mexico last year only to have her hopes of a thru-hike dashed by injury just 3 miles up the trail from where we started this morning. 569 miles into her hike, it all came to an abrupt, emotional end but rather than return this year to continue from the place where she left, she opted instead to start again from the very beginning, retracing her steps for those same 569 miles. Cathartic, in a way, not to mention incredibly impressive and uncompromising. After hiking so many miles together, it had become personal for all of us to see her take those first steps beyond the threshold that had held her back last year, and today was to be that day. Without her, I was truly saddened not to witness that moment, complete with both its redemption and its triumph. The best I could do was to find a place on the trail roughly three miles up the climb, close to where I imagined she had stopped before sadly turning her steps back to the south, and scratch a big G in the sandy tread. Beyond is a gateway to a whole new adventure for her--one that I hope Proton and I will share a part of soon.

The late highlight of the day was spotting the vaunted Mojave Green rattlesnake at 7pm. What little I know of this guy is that his venom contains both a neurotoxin and a hemotoxin--two good reasons to give him a wide berth--and that it's apparently known for not immediately rattling and giving away its position when sensing large vibrations through the ground. As opposed to other rattlers, some of which you can hear rattling from 50 yards away, Mojave Green can sit quietly just feet away from the trail without passersby ever knowing it. True enough, when I came upon him stretched across the trail enjoying the last of the sun's warmth, he reversed direction and slithered quite slowly into the grass, never making a single rattle despite my standing 4 feet away. A rattler that doesn't rattle is a dangerous creature, but I'm really glad we had a chance to see one.