Today was divided neatly into thirds: 8.5 miles of uphill sandwiched between two 8.5 mile sections of downhill. It's unusual for a day to be carved up like that and for the downhill sections to have very few moments of climbing and vice versa. Regardless, the grade was always pleasant and steady and it made for easy going even for another long day.

By the time we finished the first long descent and arrived at Milk Creek, so named for its slightly opaque appearance from the glacial silt it contained, we had already rounded a good portion of Mt. Jefferson. Passing my namesake stream, Jeff Creek, we were on our way back up, climbing to a high saddle that looked and felt much like the passes of the High Sierra. Turning back, Mt. Jefferson looked like a behemoth of a mountain, with its north face cloaked in large glaciers and hulking ridges. 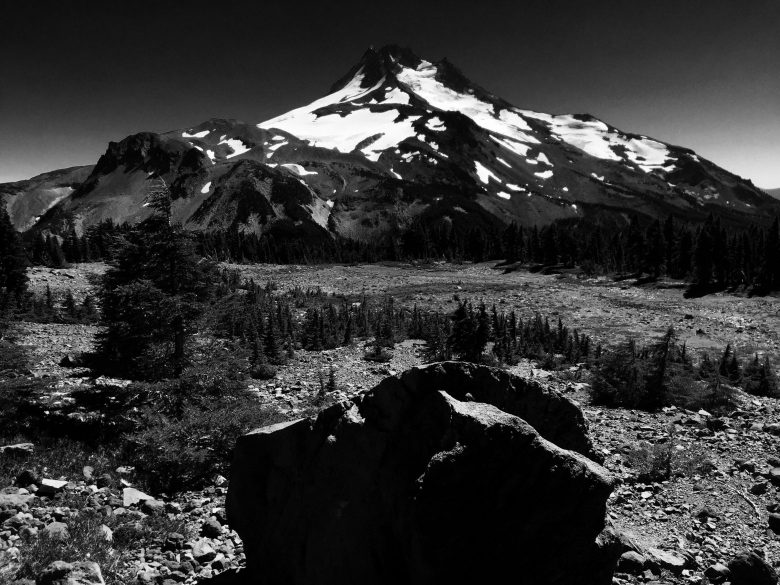 Looking back at Mount Jefferson

Turning to the north, we had quite a different view. Far in the distance, we had our first view of Mt. Hood with the Columbia River and Washington just beyond. There was even a couple of small snow patches just large enough for a quick glissade to further complete the memory of the Sierra.

Ever since we reached Mt. Lassen in Northern California, we've had the impression that with each major peak we reached you could see the next one on the horizon, one mountain passing the baton to the next in a relay of sorts, each one guiding us closer to Canada. Mt. Hood, in particular, is something we've all been looking forward to. Aside from signaling the final 50 miles of Oregon, it's the place where I'll not only get to see Emily but also where my Mom will be coming out to join me for a few days on the trail. Factor in the famous breakfast buffet at the historic Timberline Lodge that stands next to the trail on the mountain's south side and what's not to be excited about?