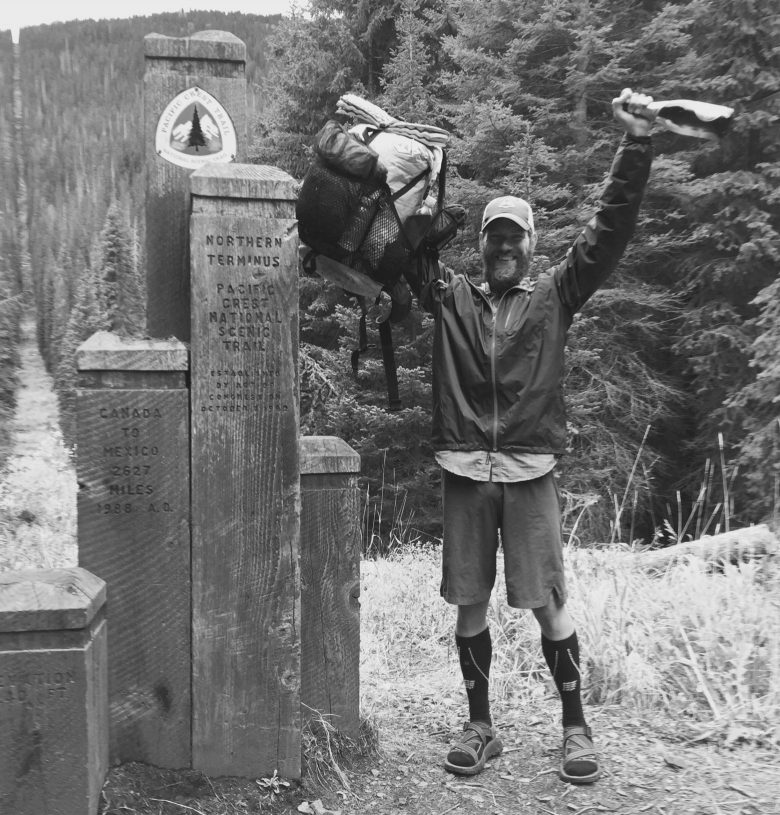 It began like any other day: morning coffee from the warmth of my sleeping bag followed by deflating and rolling up my sleeping pad, and stuffing my few belongings one by one into my pack before emerging from my tent to take it down once more. The only difference was the air of finality that surrounded each of the mundane daily tasks. Of course they didn't feel any different, but they were all the same. It was an inescapable fact that it was the last time I'd do any of these things on this trail, and with that fact came the familiar bitter-sweetness that arrives at the end of every thru-hike, the joy of the achievement forever tempered by the end of the experience that is its very foundation. 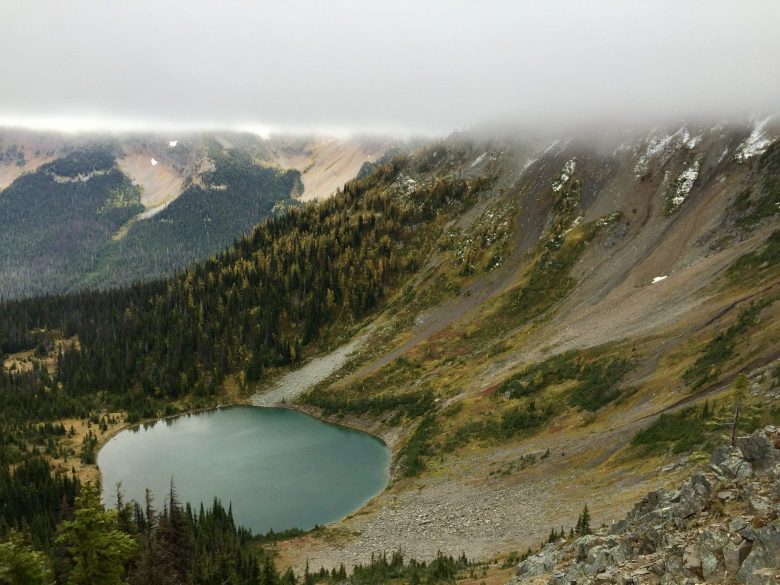 As the six of us--Beardoh, Sweet Pea, Gazelle, Roadrunner, Hammer and I--walked along under the now familiar grey skies of Washington, I struggled to focus more on the joy of at last reaching Canada, of seeing Emily, and less on the palpable sensation that this hike was an hourglass whose last grains of sand were soon to fall. After a break to filter water for the last time--yet another in a day filled with "lasts"--we had just over a mile to reach the border, and setting off once more my stomach was filled with the butterflies of apprehension. I found myself asking "How should I feel about this coming to an end?" without having the slightest clue as to what the answer ought to be.

But as the border swath came into view for the very first time, I decided that there would be plenty of time for that kind of reflection after the celebration. Around the next switchback, we could hear voices that we knew could only be those of fellow hikers reveling in the moment of completion, and it was only then that I felt the routine of hiking melt away, the welling up of excitement rising to take its place. Fittingly, it was only a few steps later that I recognized some very familiar names on a printed sign sitting next to the trail... 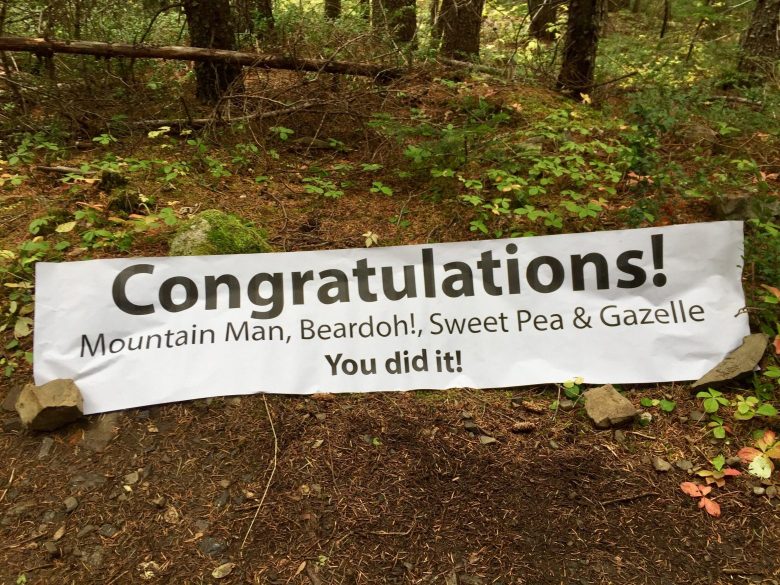 With that, and the silver border monument coming into view through the trees around the final bend, the celebration began. 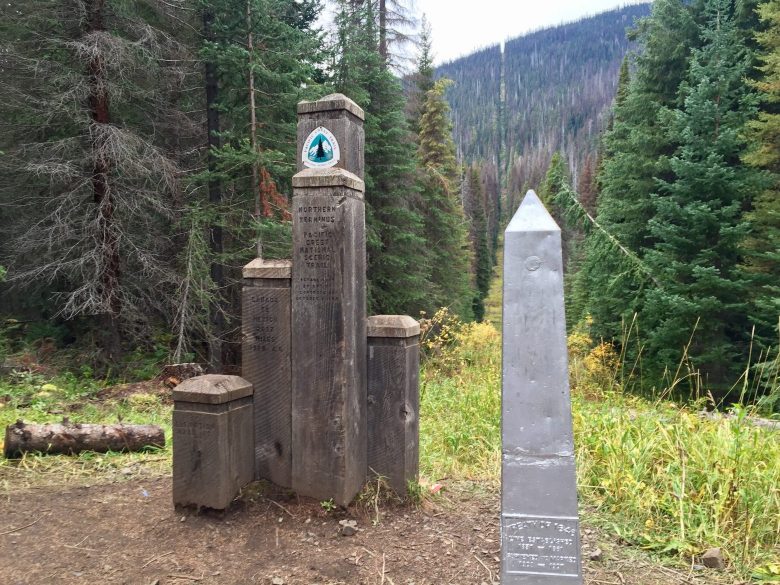 There was my dear wife, waiting patiently since mid-morning, and I couldn't have been happier to see her and to have her share in this moment. First things first, there was champagne to pop...

And although the trail has been filled with countless joys and a boundless supply of some of the most dramatic landscapes to be found anywhere in the world, it is truly the people that are the trail. From fellow thru-hikers of all stripes to trail angels and owners of hiker-friendly businesses from Campo to Manning, though the journey would still be possible without them it would certainly lack the richness that they alone add to it.

Among the many incredible people on the trail, you'd be hard pressed to find any better than these three...Gazelle, Sweet Pea, and Beardoh. 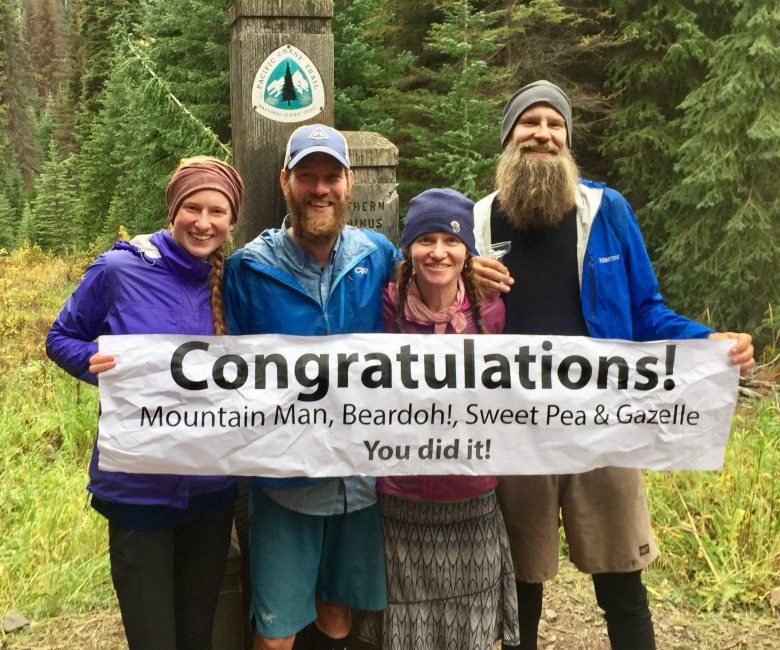 Congratulations banner at the Canadian border

Having all met on our very first day on the trail, I could never have known that we'd share so many great trail memories and eventually stand together at the Canadian border. As my hiking companions for the overwhelming majority of the trail, I cannot fathom how much less fulfilling the experience would have been without knowing them and learning from them. They're a special trio that I'm lucky to have known on such a great journey. As for Roadrunner and Hammer, I only wish they had joined us sooner! 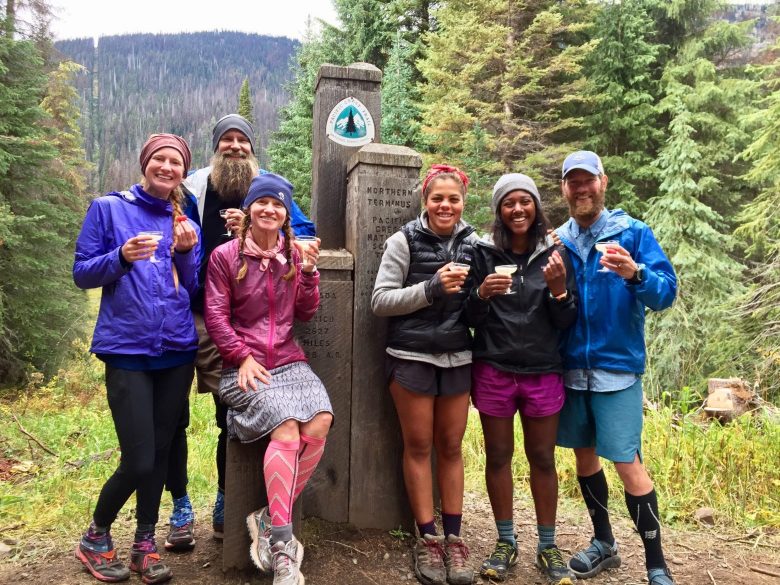 Arriving at the border in a body worn from the miles and effort, thoughts of doing a "yo-yo"--turning around and thru-hiking the entire trail again in reverse (yes, it's crazy and yes, it's been done a couple times)--never entered my mind, but as opposed to the Appalachian Trail when I reached Mt. Katahdin on tired legs in a tired body, I reached this end still feeling the strength that you might imagine comes with the territory of walking from one border of the country to the other. In the end, in a few short days and from the comfort of the home I've missed so dearly, I know it will feel as though it all went by in a time that was far too short.

Chacos at the Northern Terminus

3 states. 146 days. 2,650 miles. 133 hiking days. No matter the lens or quantitative metric you choose, it's been an undeniably long journey, but its awesome scale is hardly the trait that best defines the qualitative experience of the thing. Much like a work of impressionist art whose up-close details only resolve into full meaning when viewed from a distance, what it means to have completed the entire PCT is a truth that I know will only become clear to me across a sufficient expanse of time. And so, I will wait, contemplating every moment of this wonderful adventure, of the people who made it more special than I could have imagined, and of the next trail that waits to guide me along its path. 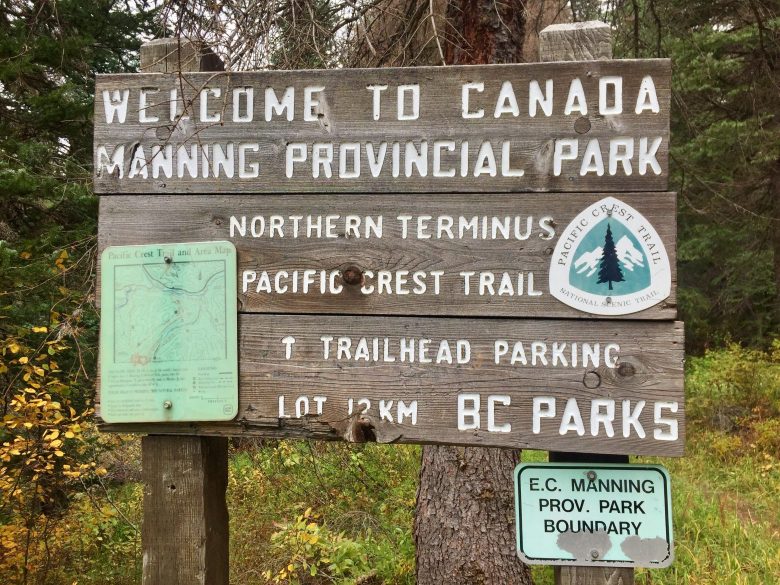