Mentally and physically exhausted. That's how I began the day. For me, the surest sign my fatigue is setting in is my utter and complete lack of patience with anything and everything: the disgustingly dirty state of my feet, the rock that I stubbed my sandal on, hell, even the ant that is stupidly clinging to the mosquito netting of my tent as I packed up this morning.

In truth, it really began last night. After a long day of hiking that only ended at 7:00, thirteen hours after it began, the pièce de résistance was having to climb a half of a mile and 400 feet down off the PCT to reach the water source--the only one for 16 miles in either direction. By the time I made it back up to cook dinner, the ball of my right foot had begun to throb and didn't cease to do so throughout the night. To throw salt in the wound, the mosquitoes that had been pleasantly absent as the summer has worn on returned with a vengeance as I cooked dinner. Normally, my patience for the collective toll of these things is quite high, but last night I went to bed frustrated and angry.

By the time the sun began to rise and I began to stir in my sleeping bag, my foot still throbbed and my mood had not improved. With more than a marathon of miles to be done again today, I knew I needed to do my best to completely empty my mind of thought as I walked to restore some balance to my headspace. It was another daylong, 13-hour struggle. Throw in yet another headache and mile upon mile of trail that was so dusty it was closer akin to walking on the moon than on dirt, and it was an uphill battle that only became steeper as the day wore on.

Our goal was to reach the next resupply at Shelter Cove resort--a campground and RV park on the shore of a remote lake--by the time the store closed at 7pm. With 27 miles to hike by then, there was little time to be wasted during the day and we clocked all of our breaks to stay on pace making everything feel rushed, mechanical. None of us like to hike like this, but it was a necessity today.

At long last, we reached the pavement leading a few hundred yards to Shelter Cove at 6:45pm only to find that, contrary to the information in various sources, the store now closed at 6pm. We'd all pushed hard for over 12 hours, each fighting fatigue in our own way, and it was all for naught.

Like most days on the trail, even the ones like this that are a challenge from start to finish--either mentally, physically, emotionally, or all of the above--there's always something that comes along to redeem it, if you're paying attention. As we sat cooking our dinner next to the lake, tired and disappointed about not being able to get real food from the store for dinner, a bright orange full moon began to peek over the hills across the lake and methodically rise higher into the sky. It was a spectacularly beautiful sight as the last moments of dusk gave way to darkness and turned the tide of what had been, up to that point, the worst day on the trail to date. 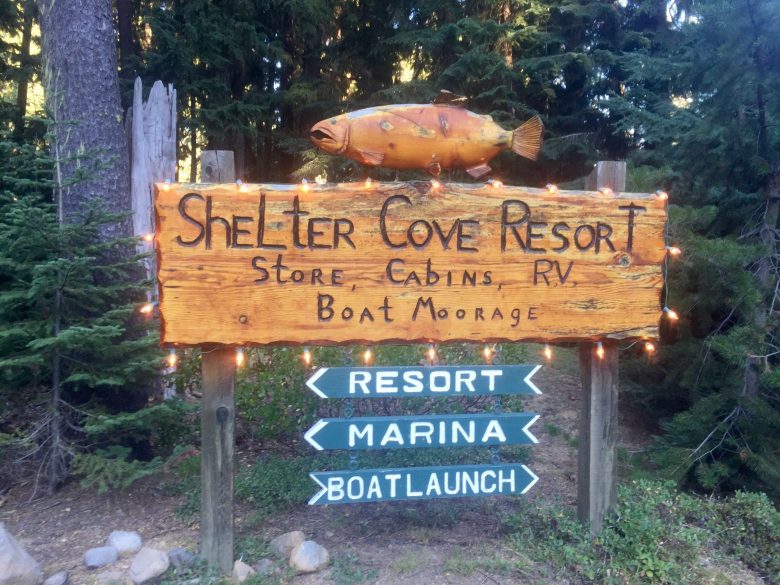