Pacific Crest Trail 2016 » In the Heart of the Cascades

It stretched into the distance as far as I could see. With my back towards the Three Sisters, Mt. Washington, Three-Fingered Jack, and Mt. Jefferson towered over what looked like a boundless expanse of nothing but volcanic rock. Wave upon wave of fields were piled high with the stuff. Like a scene conjuring more Hawaii than Pacific Northwest it was a clear reminder that at its heart the Cascades are a range born of and shaped by volcanic activity.

Even through yet more ghostly remnants of fire ravaged forests, the volcanic rock persisted for miles. Rougher and far more abrasive even than granite, it also forms in much rounder chunks that make hiking on it far less stable. It reminded me of walking down a freshly graveled road if the stones were instead the size of baseballs. With feet and ankles adjusting to every step, it made for slower going and bruised soles.

The bright side to these fields was twofold: the unbroken views in all directions, and the telltale little blue plate we came across that stood in stark contrast to the sea of black rock. Coppertone had arrived one more time. On the narrow road that snakes its way across the range and through these fields of volcanic rock, he'd set up his usual operation of lawn chairs and root beer floats to welcome us. After seeing him and accepting his generosity so many times now going back to the first few hundred miles of the trail, it was saddening when he realized he'd only be making two more stops between here and Canada. I hope we'll cross paths with him at one or both. 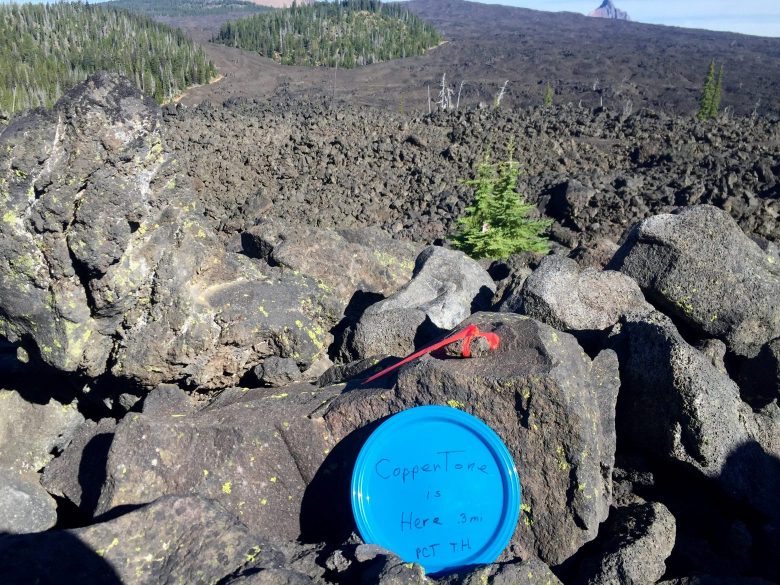 Upon leaving Coppertone, we left behind the Three Sisters Wilderness and entered the Mt. Washington Wilderness, but it didn't spell the end of hiking through all those rocks. At one point, Sweet Pea and I looked up to notice a solitary tree growing straight out of the rock, with nothing else growing around it for over a mile in any direction.

Strolling through fields of lava rock

At last, the trail landed back on its usual dusty soil, and Mt. Washington loomed over yet another burn area. Swinging onto the west side of the triangular peak, we cruised down the final few miles to Big Lake Youth Camp for resupply. Hoping to partake in a meal at this lakeside camp, we were disappointed to find a note on the camp headquarters announcing that meals would not be served for three days. Noticing that the camp was nearly devoid of anyone but a few hikers, we figured that camp sessions had probably come to an end for the summer only days ago. Despite the letdown, it was a great place to enjoy a free shower and laundry while we sorted through our resupply boxes and cooked dinner on the porch. Tomorrow is a big day: sometime in the morning, we cross 2,000 miles... 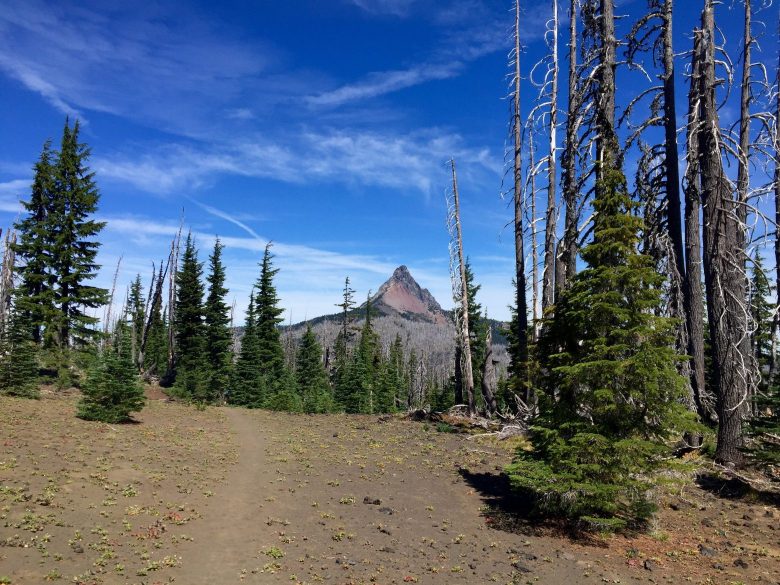