The clock had not struck 6am and yet there he was, a man holding an urn of coffee and a box of donuts outside my tent. His name was Chipmunk, a local trail angel, and while he'd come by to setup some trail magic at the road crossing not 200 yards away he'd spotted our tents and walked over to give us first dibs on his breakfast goodies. Trail magic while still in my sleeping bag. When that's the way your morning begins, you know it's going to be a good day.

Minutes up the trail, we passed through a pine plantation where a man drove a piece of machinery that nimbly navigated between the trees only to stop in front of a particular one, grasp the trunk with a set of claws, and rip it from the ground. In the span of a minute or two, several 50-foot trees had been separated from the earth and stacked in a neat pile. It was the first truly intimate encounter the trail has had with logging and it brought into focus the other side of the longstanding debate of preservation versus conversation that dates back to when John Muir and Gifford Pinchot argued the issue. Up until now, the trail has largely meandered through a patchwork of areas preserved solely for the enjoyment of the people as John Muir had advocated for. This morning's trail represented the conservation side of the debate, where land was set aside for what Gifford Pinchot referred to as "wise use": land that could not only be enjoyed by the people but more importantly, managed as a vital natural resource. It's a debate that continues to this day and is discussed at length in Roderick Frazier Nash's excellent though incredibly dense tome on the subject, Wilderness and the American Mind.

15 miles into the day and without having seen another soul, we crossed into our fourth national park of the PCT: Lassen Volcanic National Park. 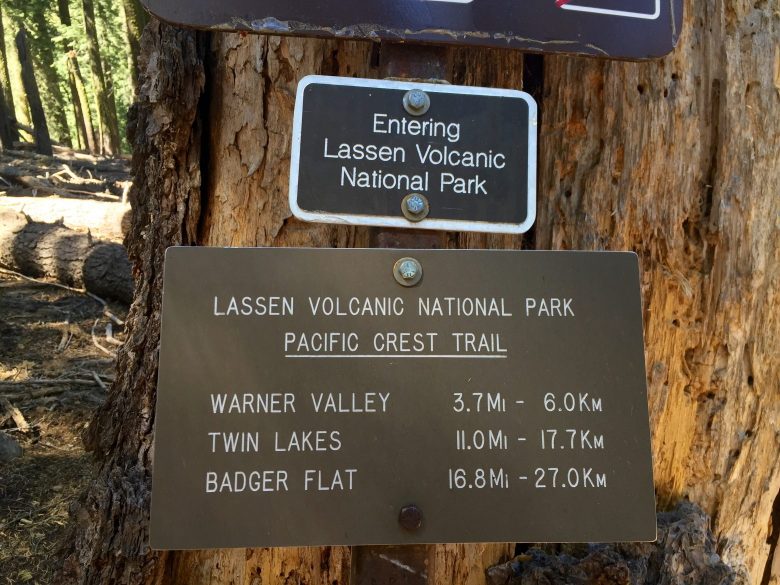 With only a handful of miles remaining for the day, we took a short detour down a side trail to Terminal Geyser, a geothermal feature that vents an impressive column of steam rather than water. Water boiled and bubbled in the creek that emanated from the rocks near the geyser and you could feel the warmth coming off the creek when holding your hands a few inches above it. The sulfurous smell of rotten eggs was strong when the wind shifted in our direction.

Side trip to a steam vent

The day came to an end befitting of its beginning as we sat down to a hiker dinner at Drakesbad Guest Ranch. Following a shower, laundry, and a sorting of our resupply boxes, the staff came out to setup placemats and silverware on a picnic table outside the main dining hall where the ranch guests were eating. Rotisserie chicken, mushroom ravioli, mashed potatoes, and salad all were spectacular. For the small group of us fortunate enough to be there this evening, it was some of the best "real" food any of us have had since starting the trail.