In spite of the increasingly warmer weather, we awoke to a very chilly morning enough so that we each started hiking with our down jackets on. The initial climb and descent were an abject lesson in the katabatic effect. As we climbed a mere hundred or two feet out of our camp by a small river the air immediately began to warm, only to have the chill swiftly return as we descended into a neighboring drainage where the cold air had again pooled overnight. It was a stark reminder of how dramatically different the temperature can be across such a small change in elevation.

During that first hour of the early morning, Gazelle and I were a few minutes behind Beardoh and Sweet Pea when a large, beautifully blond-colored bear ambled through a wide open area littered with downed trees roughly 40 feet to our left. Without so much as looking in our direction, he slowly made his way to the stump of a dead tree, stood on his hind legs and attempted to dismantle the bark in search of grubs. At 6 to 7 feet tall on his hind legs it was an impressive sight, but the light color of his fur was the most memorable part of the encounter. It's easy to forget that black bears very often do not have truly black fur, and this bear was a beautiful example of that fact.

Most of the late morning and afternoon were spent drifting along trail that traversed a very large burn area, the once dense forest now reduced to a swath of ghostly dead trees showing the scars of their fate.

Just as we sat down to a lunch break, Gazelle noticed a flurry of tiny creatures bouncing around in the dirt. Once Beardoh, Sweet Pea and I came over to have a look it became clear that rather than a swarm of crickets, the little bouncing objects were actually tiny little frogs--hundreds upon hundreds of them, jumping in masses or huddling together in small depressions as our footsteps drew nearer to them. Less than an inch in size, they appeared in an incredible array of colors from brownish red to camouflage to green as bright as a Granny Smith apple. 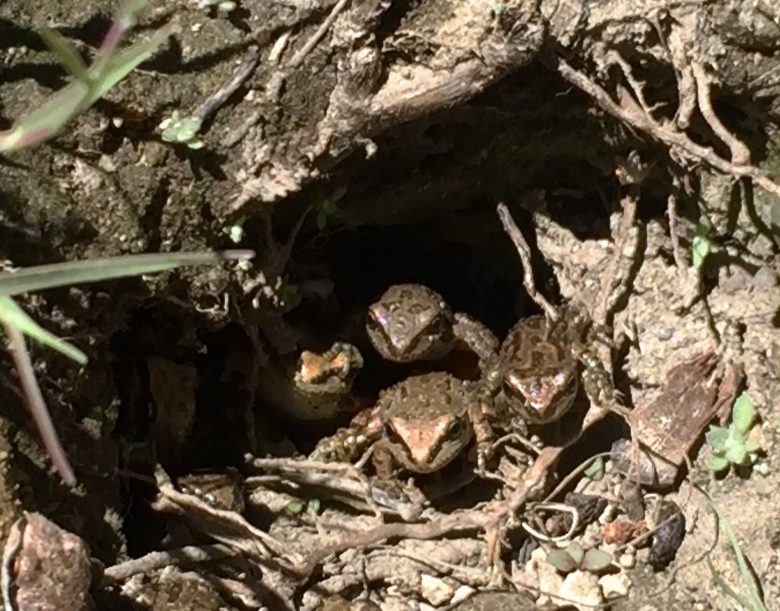 With the number of bears equaling the number of other hikers we saw today, the trail seems to have become quite a bit quieter these past few days. Whether it's coincidence or a decline in the number of thru-hikers still on trail, I think we all enjoyed the increasing sense of solitude.

What the burn area also afforded was spectacular views of Mt. Lassen, just as we neared the northern boundary of the park we had entered only yesterday. A short visit to this national park, but it seemed fitting to have such a beautiful vantage point to view its namesake before bidding the park farewell.

« A Day of Firsts
What Do You Mean There's No Water? »
Subscribe to Comments on This Post
0 Comments
Inline Feedbacks
View all comments