True story: I ate 2000 calories for breakfast this morning. But I digress...

A mid-year Christmas occurred on the side of the road this morning, just after 9am outside the Tuolumne Meadows post office. When I showed my ID, the man behind the counter was happy to unload the five boxes with the same unintelligible last name written on them. 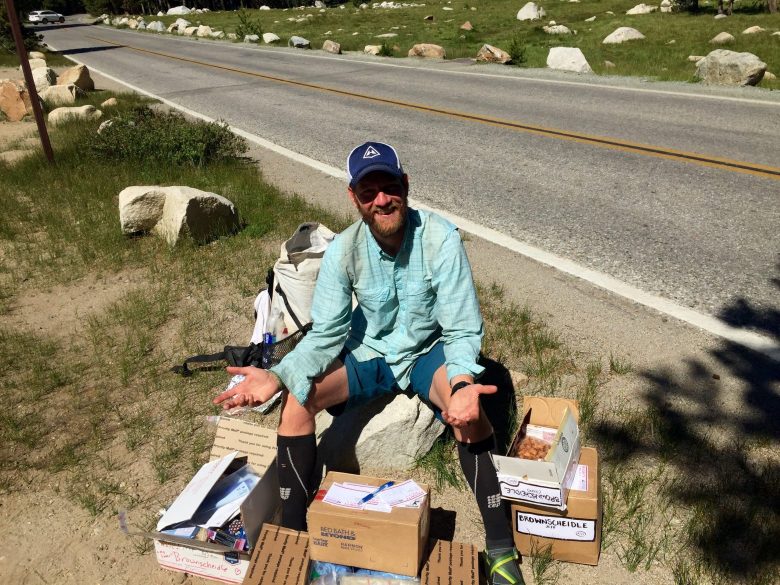 With so much unexpected goodness, it's time for some thank-you notes.

Mom: Thank you for the new shirt! I can't imagine what would give you the idea that I'm in need of one....could it be the black areas that were once light blue, or have these blog photos of me become scratch and sniff, perhaps? Either way, I'm holding off on rewarding myself with switching to the new one until the half way point in a few weeks. Also, the brownies are amazing! Is it bad that I ate more than half of them already today?

Jason: Thank you for the smoked salmon! I held off all day and saved it as a post-dinner treat, and it was well worth the wait. Absolutely delicious--I could taste your triumph in catching that beautiful fish.

The Sainsburys: Thank you for all of the goodies! Between the Trader Joe's yum-yums and the rare candies, you've officially delivered on treats that are impossible to find on the trail. Oh, and they'll all be safely in my tummy long before this entry is ever posted to the blog...

Emily: My love, you're always full of surprises. What should have been an unexciting box of new maps and assorted supplies looked more like the resupply box from hiker heaven, complete with Coconut Ritter Sport. Thank you!

Needless to say, future trips to the post office will pale in comparison thanks to the cornucopia of goodness I unwrapped this morning. Life is good.

Today also marked a changing of the guard as I ushered my original pair of Chacos into retirement. Tears were shed, songs were sung, condolences uttered. 942 miles in, they have plenty of life left in them but the grit of the desert and the snow of the Sierra have conspired to fray a good portion of the main strap. Rather than risk a catastrophic blowout sometime in the next few hundred miles, it was time to put a new pair into service. 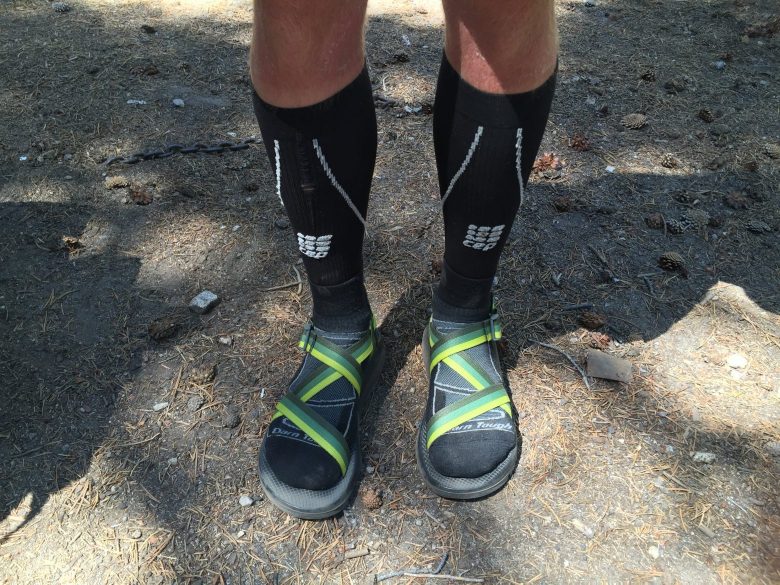 The trouble with having to deal with the post office this morning was waiting for it to open. Since only Gazelle and I needed to collect boxes, everyone else was able to leave at the normal early start while we waited. The silver lining was having breakfast at the grill next door, but it also meant not hitting the trail until 11am.

As we finally began to put some distance between us and Tuolumne Meadows, we watched helicopters make several trips back and forth across the sky, collecting large payloads of water to drop on the newly burning wildfire outside Lee Vining to the east of us. At about the same time, we caught up with a couple of backpackers whose loads made my shoulders hurt just looking at them.

With our newly loaded packs and the heat of the day nearly upon us, the trail along the Tuolumne River and Falls was the perfect way to ease back into the swing of things.

Our plan was to do about 20 miles to catch up and camp with the others who'd left early this morning, but by mid-afternoon Gazelle's recurring digestive troubles began to rear their ugly heads yet again. As the energy began to drain out of her and the evening began to near, we decided to stop short of our goal and get some rest, hoping to catch up with the others either tomorrow or, at worst, at the next resupply in three days.

Our greeting party at day's end was a bloodthirsty swarm of mosquitoes that brought my headnet out of storage for the first time, but our reward for surviving them was a sunset that cast a warm red alpenglow on the peaks from which we'd come.