Every break spot. Every campsite. Every creekside where we stopped for water and every place we stood to admire the view. I remember them all with such vividness and clarity that it's as if my hike of the JMT with my best friend last year had happened just moments ago. Even in memory, Emily surrounds me.

The cold evening darkened and emerged again into the light as an equally cold morning. The air was dead calm and a thin veneer of ice had formed on the still surface of puddles large and small, some of them temporarily repurposing themselves as mirrors. 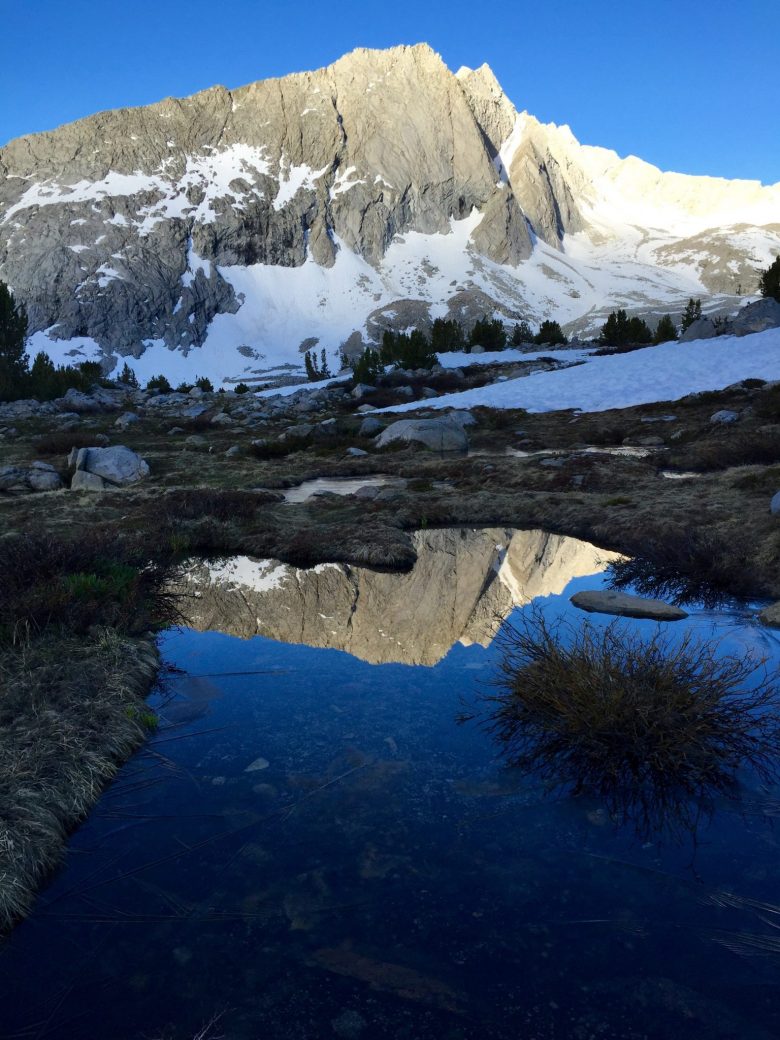 The climb to Mather Pass was a cold one, but the firm snow conditions made for a speedier ascent. Between the steepness of the climb and a scramble on loose, steep scree on the headwall below the pass, it was unanimous that this had been the toughest pass yet.

The view down into the basin on the cold north side was quite different--a vast winterscape of frozen sun-cupped snow. Perfect conditions for sandals, however.

As we left the snow behind and rounded the Palisade lakes, we began to see not only whole families of marmots scurrying about but a fair number of southbound hikers--some hiking the John Muir Trail, others just out on a multi-day backpacking trip. Looking back to the pass that they were now headed towards, I remembered a conversation with Beardoh weeks ago when we agreed that you could hike the John Muir Trail every year for the rest of your life and never grow tired of it.

The plunge from the high country down to the river valley below follows what I believe was the last portion of the JMT to be constructed: the Golden Staircase. A marvel of trail engineering, the Golden Staircase is a long narrow series of hairpin switchbacks carved out of what would otherwise be a crook of bare rock next to the creek that drains the lakes above.

We spent the rest of the day on pleasant, easy trail following the course of the creek down to its confluence with another creek, which we then followed upstream through LeConte Canyon, the very foothills of the climb up to Muir Pass--tomorrow's next adventure.